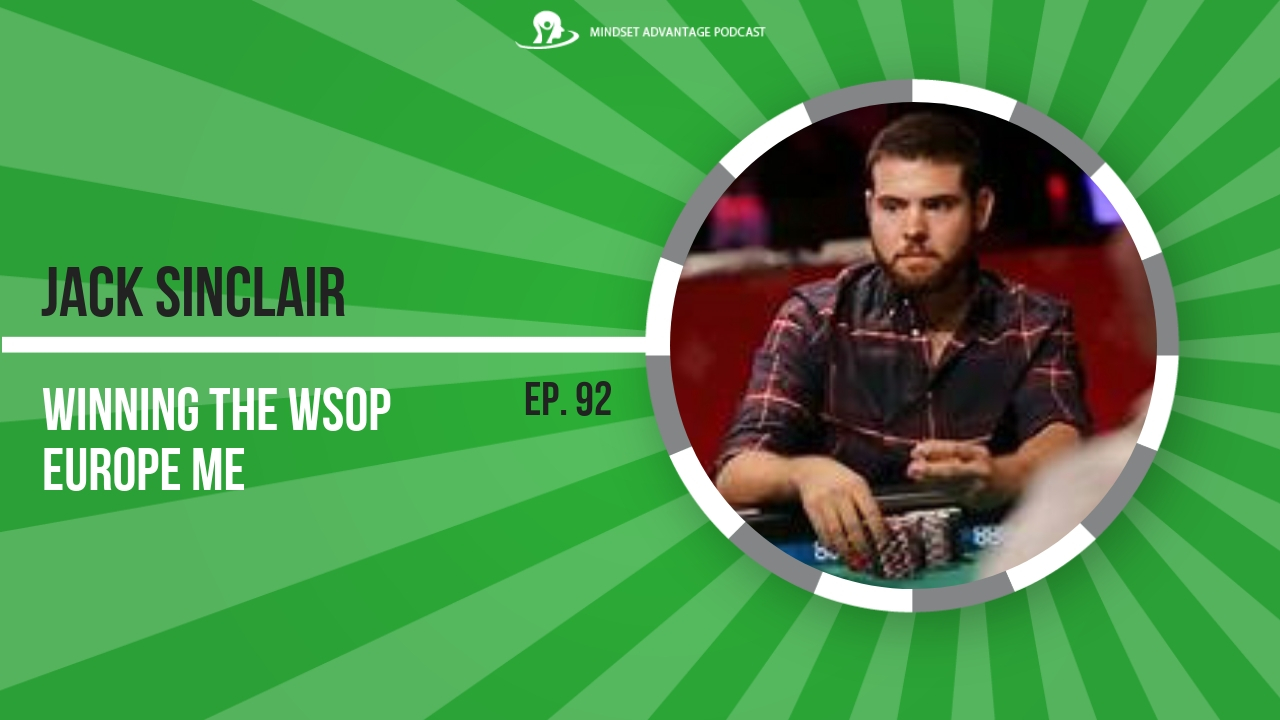 In this episode, Jack Sinclair, WSOP Europe champion and final tabler at the main event in Las Vegas, reveals what he did to go from a recreational player with a day job to WSOP champion – in two and a half years. Elliot and Jack discuss what it feels like to get into a flow state and why understanding psychology can give you that extra edge. Listen in to hear a professional who fast-tracked his way to success share some insider tips that’ll inspire you to take leaps of faith, improve your game, and experience your own flow state.

Visit The Mindset Advantage Podcast or find us on iTunes to subscribe, visit previous episodes, and learn more about your host, Elliot Roe.

[00:50] – Introducing Jack Sinclair, a pro who made it to the final table at the main event in Las Vegas and won the World Series of Poker Europe

[01:30] – He’s been a professional poker player for two and a half years now; he started playing online MTTs in London

[01:40] – He had a coaching session with Phil Gruissem and later became his roommate

[03:30] – He was happy to have placed 8th; he was playing above his highest level and was happy with his performance

[06:20] – He started playing poker at university and got hooked

[07:43] – He’s always been a live player; he has a good understanding of psychology which helps his game

[08:17] – With online poker you can’t read people as easily; he plays an exploitative game style which is best live

[09:40] – Anton Morgenstern reads “vibes” and Jack is inspired by that

[11:15] – He was an early adopter of The Mindset Advantage and hypnosis; he was a member of Poker Nerve as well

[12:17] – He’s suspicious of everything but thinks that these tools are helping his game

[15:12] – Producing your best technical game at the table without failing due to energy loss, stress, or tilt

[15:30] – You can’t always play to the best of your ability, that’s why mindset improvement is important

[18:25] – It didn’t feel momentous; he was just blown away being in Vegas and it was an overload

[20:10] – He got into flow state on day six; he felt like he was no longer thinking and that every move was being gifted to him

[21:52] – He felt he was using his brain more and that the stream tables helped

[23:33] – On day four or five of WSOP Europe he had a hand where he thought he was beat but called anyway; he knew he should have folded

[25:20] – Now he doesn’t care and does what he believes is right; this mentality helped him at the final table

[26:02] – You’ll always look like an idiot because the audience can see things you can’t

[27:05] – The reality is that there aren’t high-level poker players giving free, good advice on YouTube or stream comments

[28:00] – He is satisfied with the way he played; he minimized basic errors and honed in his mental game