Episode 84 – Zachary Elwood on The Mindset of Poker Tells 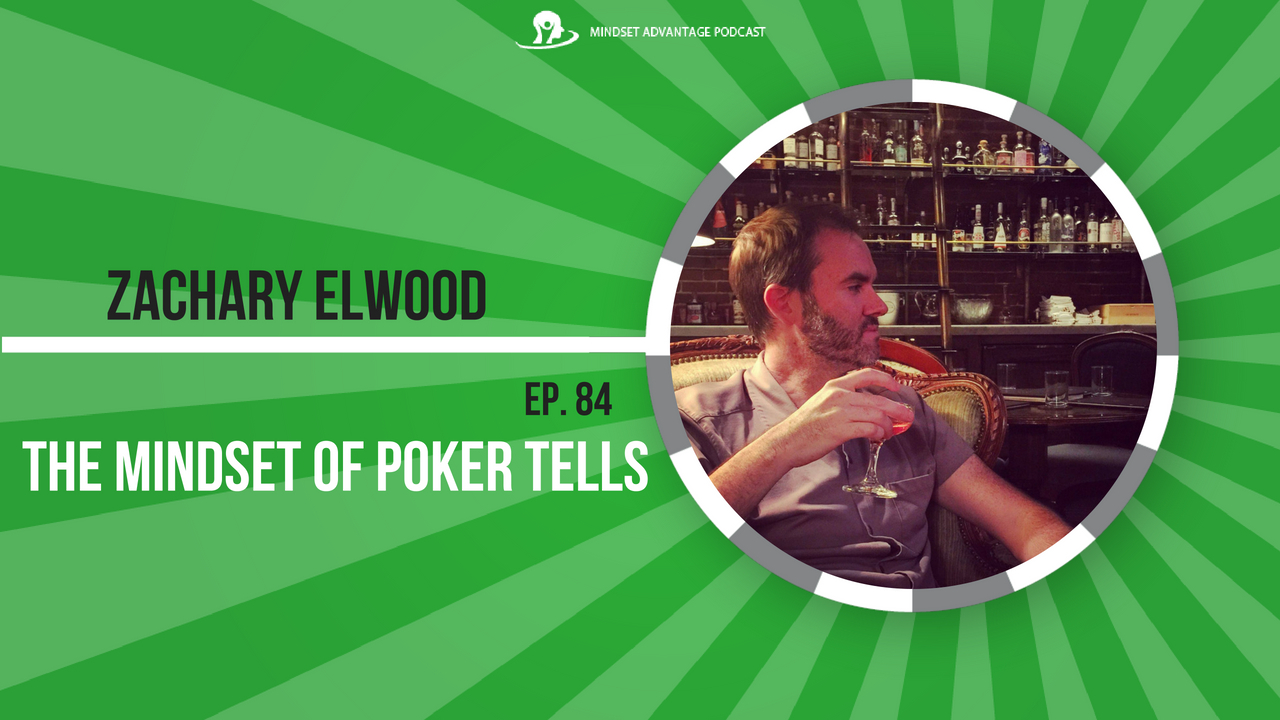 In this episode, Zach Elwood, author, former professional poker player, and poker behavior consultant, reveals the most consistent tells that he’s studied over years of playing and analysis. Elliot and Zach discuss why the studying of tells will be more important in the 2018 World Series than in previous years. Listen in to hear one of the few experts on tells in the game share some invaluable tips and tricks that’ll give you an extra advantage at the table.

Visit The Mindset Advantage Podcast or find us on iTunes to subscribe, visit previous episodes, and learn more about your host, Elliot Roe.

[00:50] – Introducing Zach Elwood, author of 3 books on poker tells, who has helped main event final table players prepare through studying and tips [01:20] – Zach has been working on the poker tells video series and has been trying to watch the World Series [01:30] – When he watches the World Series he’s always looking for tells; the earlier in the main, the easier it is to see behaviors [02:20] – The differences between Zach’s 3 books [02:30] – His first book in 2012, “Reading Poker Tells,” goes into things that hadn’t been talked about in terms of physical, verbal and the thinking behind poker tells [02:53] – “Verbal Poker Tells” of 2014 was longer and more in-depth; he’s most proud of this one [03:11] – “Exploiting Poker Tells” came out last year and explored more physical tells, concrete analysis, and fundamental strategy [04:10] – There isn’t a lot of good content about poker strategy; Zach had to do a lot of research and analysis to write his books [04:50] – He created a spreadsheet to create codes and organize patterns he saw on TV and while playing [06:05] – Some poker tell hints and tips [06:15] – Example: The famous hand between Esfandiari and Negreanu when Negreanu raises it on the flop and goes all in, and says “Thank God you didn’t snap call” [06:30] – The expressing of relief after someone doesn’t call immediately will almost always be a pretty honest reaction and can help you narrow down someone’s hand [07:15] – “We can” statements and how he categorized hand statements; bluffers usually don’t want to weaken the perceived range of their hand [08:00] – Indirect weak-hand statements, the consistency of the weak-hand patterns, and understanding underlying intentions [09:33] – A deeper explanation of the book “Exploiting Poker Tells” [09:38] – He revisited ideas that were firmer in his mind after having wrote about them 5 years’ prior [10:00] – It goes into how to determine behaviors as meaningful or not meaningful [10:45] – The things he’s done from outside: the video series and he worked with 2 main event final table WSOP players, Amir Levahot and Max Steinberg [11:25] – They watched old video footage of their opponents and video footage during the WSOP [11:30] – A potential game-changing tell [11:35] – The 2011 main event, Pius Heinz was the champion that year, and he was playing Martin Staszko [11:43] – Heinz had a pronounced tell where he looked down during a hand and at the flop; turns out he had pocket aces [12:30] – Zach made a video analyzing his tells and explains how to use those tells to your advantage [13:30] – It will be more interesting this year from a behavioral perspective because the players won’t have a break before playing [14:00] – There will be more in-the-moment tells [14:22] – Amateur or recreational players are going to be exhausted this year while the professionals will be battle-tested [15:13] – How Zach has used what he’s learned through poker in other areas of life [15:20] – He doesn’t pretend to have special knowledge and doesn’t believe in a correlation [15:32] – He did work identifying fake accounts on Facebook and his work was featured in the Washington Post and New York Times [16:06] – He was excited and his parents were proud, especially because he started out studying print journalism [16:40] – He was pissed about certain things happening in the world and was happy to create awareness about something others didn’t know about [17:20] – He had the same sentiment about poker tells [17:35] – The issue with fake Facebook accounts [17:40] – He’s been friended by fake accounts who were accepted by others in his network [18:20] – A lot of it is financial because the fake accounts drive people to websites who pay for the traffic [19:11] – In some cases the fake account’s purpose is unclear; Zach doesn’t think it’s purely financial [20:15] – Facebook doesn’t seem to care [20:40] – Zach’s recommendations and tips for poker players [21:00] – Strategy is more important than tells, but if you’ve got strategy down and want to learn about tells, watch Zach’s free videos on YouTube [21:27] – Read Zach’s articles on Poker News and his first book “Reading Poker Tells”

Keep Up With Elliot:

About the Author Design Help