How Rafael Nadal’s Strange Habits Can Improve Your Poker Game 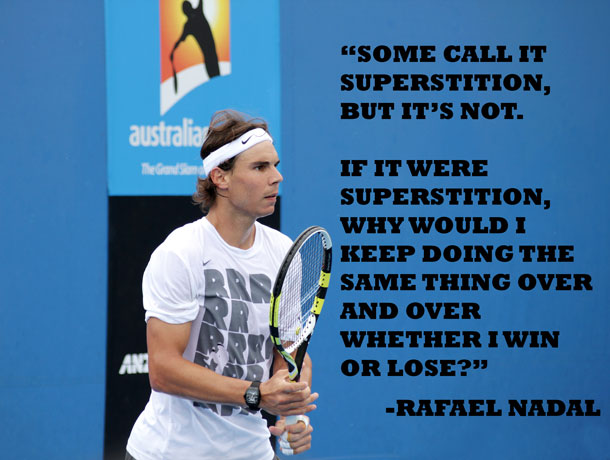 Rafael Nadal, one of the greatest tennis players to ever live, does some really strange stuff before and after each point.

Here is one of his routines:

You can see it for yourself in this video:

NBA players are notorious for having complicated rituals before taking a free throw.

Rip Hamilton dribbles the ball twice in front of him then once to the side before each attempt. Gilbert Arenas (also a poker player) passes the ball behind his back 3 times before taking the shot. Both players have a career free throw success rate of over 80%.

This video shows some of the strangest free throw routines:

What would cause these elite athletes to partake in seemingly superstitious routines?

Nadal explained his routines in the book Rafa: My Story:

[quote]Once on court, I sat down, took off my white tracksuit top, and took a sip from a bottle of water. Then from a second bottle. I repeat the sequence, every time, before a match begins, and at every break between games, until a match is over. A sip from one bottle, and then from another.

And then I put the two bottles down at my feet, in front of my chair to my left, one neatly behind the other, diagonally aimed at the court. Some call it superstition, but it’s not. If it were superstition, why would I keep doing the same thing over and over whether I win or lose? It’s a way of placing myself in a match, ordering my surroundings to match the order I seek in my head.[/quote]

Free throws are one of the most important aspects of a basketball game. Shooting a poor percentage often makes the difference between winning and losing a game. With no defenders to interrupt the shot, it is the easiest attempt a player will find. The only obstacle between the ball and the basket is their mind.

These rituals are an attempt to focus in order to allow them to produce them same motion they have practiced hundreds of thousands of times.

With any form of competition the ability to call up a high level of mental focus at will is a huge factor in success. This is even more important in competitions of the mind such as poker and chess.

Josh Waitzkin, a International Chess Champion and martial arts world champion, devoted a chapter in his book, The Art of Learning, to this concept, which he describes as “the trigger”:

[quote]The point to this system of creating your own trigger is that a physiological connection is formed between the routine and the activity it precede.

Once the routine is internalized, it can be used before any activity and a similar state of mind will emerge. p. 190[/quote]

Either way inconsistent results are obtained because of a lack of a consistent pre-game routine.

Imagine how you felt during the best session you’ve ever had.

Did you feel focused and alert, taking notice of every small piece of information available? Were you able to make the correct decisions quickly with no self doubt holding you back? Did bad beats and coolers just slide off of you, causing no tilt at all?

That state of peak performance is what you are looking to harness with a pregame routine.

The goal is to tether that positive mindset to an item, process, or action so you can call up this state when it is needed most. While you may not be able to reproduce that mindset perfectly before every session, you will be able to get there much more frequently and predictably.

Starting your sessions with a mindset for peak performance isn’t some mystical event that happens on a whim. It’s a skill that can be developed, no different than any other aspect of the game.

Anyone that struggles from mental game issues, such as tilt, low volume, or lack of focus, can see a big improvement in their results by implementing a proper pre game routine.

In a future article I will discuss the process of creating your own pre-game routine, but if you want a bit of a shortcut you can check out my Pre-Game Warm Up MP3s.

What I’ve done is combined my experience as a hypnotherapist and knowledge of effective pre-game routines, to create audio programs that take the guess work out of developing a proper mindset before each session.

All you have to do is pop in some headphones and find a quiet place to relax. The MP3 will take you through a hypnotherapy sequence, similar to a guided meditation. Once the audio has finished the goal is for you to be feeling great and ready to play your best ever poker.

If this sounds like something that can help your game, then click here to check out my Pre-Game Warm Up MP3s.

I appreciate Elliot for sorting our such little things from Rafael Nadal playing in between. Yes, I often also noticed he was doing the same things after winning a point. But I still believe these types of superstitions are not lucky for every person. Each individual has their own skills and tricks in mind. All they need to utilize each potential and chance or luck wisely to income from the benefits. Thanks.