No matter if you’re playing a 2-5 game at your local casino, or the nosebleeds online, poker is a game of fierce competition.

There are many social aspects to the game, but that doesn’t change the fact that the goal is to win money from your opponents, something they are desperately trying to prevent you from doing.

In addition to poker players I work with high caliber MMA competitors, and there are many similarities between the two.

If you’re a professional player you’re out there fighting for your livelihood every session. There is a lot to be learned from someone whose job it is to put their body on the line, especially someone who has achieved World Champion status.

This client story is all about developing a champion’s mindset and preparing to perform at your best in the biggest moments of your life.

On Saturday Carla Esparsa will face Joanna Jedrzejczyk at UFC 185 in her first attempt to defend her Strawweight (115 lbs) Championship Belt. 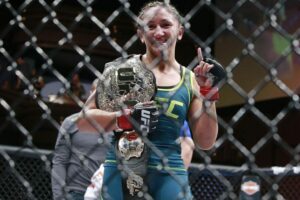 Earlier this year I worked with Carla to prepare her for her appearance on The Ultimate Fighter (TUF) Season 20. TUF is the UFC’s reality show that puts fighter’s in a house in Las Vegas where they compete for a UFC contract.

The stakes for season 20 would be much higher, as the season would be the launching point for the Women’s 115 lb division. This meant that for the first time ever the two TUF finalists would face each other for a UFC Championship Belt.

After Carla won all her fights on the show we worked to prepare her for her title fight vs Rose Namajunas, where she was an underdog despite entering the show as the #1 ranked fighter.

This is what she had to say about working with me on her mindset:

Working with Elliot has given me so much mental strength.

Before going on to The Ultimate Fighter, one of the most difficult mental and physical experiences a fighter can go through, I had many sessions with Elliot.

The mindset and mental exercises that I went into the house with was a huge part of my success.

After winning the Ultimate Fighter show and making it to the finals to fight for the first ever UFC Strawweight Title, I had a roller coaster of emotions, stresses, and pressure to deal with. And I did it!

Thank you Elliot for helping me become the first ever UFC Strawweight Champion!

I learned a lot about what it takes to become a champion by working with Carla, and realized that most of what we worked on could be used by poker players to improve their results at the table. Here are my top 3 insights learned from preparing a fighter to become a champion:

1. Preparing for the Big Moment

There are moments in our lives that can have a massive impact on the direction our life takes, depending on the result. For a fighter this is a championship fight. For a poker player this could be making the final of a huge MTT or finally taking a shot at higher stakes.

When these moments come you must be as prepared as possible to capitalize on the opportunity.

With UFC fighters I focus on using visualization techniques to help them prepare mentally for different paths the fight may take, and have a set reaction ready to handle each possibility.

We would visualize the entire fight in her mind, and concentrate on emotional control and total focus no matter what was thrown at her in the cage.

I used very similar techniques with Andoni Larabe, helping him to prepare for the 2014 WSOP Main Event final table.

Frustration and poor play often stems from being faced with situations and decisions we are unfamiliar with. This is why off the table preparation, both strategic and mental, is so important to being a successful poker player.

The will to win and unshakable self belief play a huge role in becoming a champion.

Managing your emotions and channeling them in a positive direction also separates champions from contenders.

If you watch their fight you’ll notice Rose (the bookies favorite) was moving around a lot and shaking her hands trying to deal with the adrenaline in her body.

Carla was just far more calm and focused controlling her nerves in a more efficient manner. This is a huge edge in a fight, nerves burn a lot of energy and over 5 rounds that can be the difference between winning and losing.

3. What Poker Players Can Learn from a UFC Champion

The key lesson that poker players can take away from Carla’s rise to UFC champion is to always prepare yourself for those big moments.

Spending some time visualizing what will happen when you’re on the bubble, at the final table, and heads up for the trophy. Sure, you’re not going to make it there most of the time, but it’s important that when you get that opportunity you are in the best mindset to take advantage of it.

If you’re looking to take a shot at a limit you’re not fully comfortable with don’t just jump in blind. These sessions can have a big impact on your career, so spend some time planning it out. Imagine every scenario that could happen, both great runs and really brutal ones. Imagine the first time you run a big bluff or make a tough call for your whole stack.

If you see it in your mind you’ll be able to handle it in the game and will be able to perform at your highest level during a stressful situation.

Carla Esparsa defends her belt Joanna Jedrzejczyk at UFC 185 on 3/14/2015 in Dallas, TX and available on PPV.

You can wish her good luck by following her on twitter: @CarlaEsparza1