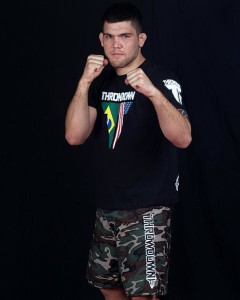 Robert Drysdale is one of the most accomplished tournament decorated Brazilian Jiu-Jitsu Black Belts in the entire 100+ year history of this martial art. Robert was born in the USA in 1981 and has lived in both the united states and Brazil. Robert started his Brazilian Jiu-Jitsu career in Las Vegas, NV in the late 1990’s and trained extensively with MMA pioneer John Lewis as well as the American black belt Steve Desilva.

Early on in his career, as a blue belt in BJJ while still living in Las Vegas, Robert Drysdale made the decision to return to Brazil to train full time with the best teams in Brazil. From 1999 to 2008 Robert lived full time in Sao Paulo Brazil where trained in BJJ full time, owned and operated a Brazilian Jiu-Jitsu School, and coached his students when they competed. Additionally, Robert Drysdale made the commitment to compete for almost 10 years. In this time span, he competed in more than 100 traditional Brazilian Jiu-Jitsu tournaments and earned over 90 different Titles.That list of championships includes 6 different medals in the adult division at the Brazilian Mundials and the Brazilian world Cup.